I got to thinking that I wanted to get back to my blog because you know I *might* not have enough to do. Okay, okay I have a ton of stuff to do but I really rarely put out there the things I do on a daily basis. So instead of blowing up Facebook with all my fabulousness I will put it here.  And just because I don't blow up Facebook doesn't mean I don't do really fabulous things, I just don't brag about it, because come on I am the original ME! And I know you all have the time to stop in and see my life- or at least blips of it right?

On that note I know this was mainly a going green page, and it still is but I also want to show you that I am not perfectly green or even pretend to be. I am not trying to pretend to be some perfect mother/wife/person who never gets stuff wrong- because I do- a lot. Heck just ask my kids they will tell you I am the meanest worst mom going!

So since starting the blog I have added at least 2 pets and lost at least that many, I have added at least 1 child if not 2. We are in the process of trying to move to a larger place which would be easy enough if we didn't have such ridiculously high needs wants. I need want it to have 3 or more acres, need want it to have 2 bathrooms and 4 bedrooms. And we want need it to be a reasonable commute for hubby to go to work. I think he said something like he didn't want to drive more than 3 hours- errr maybe it was 40 minutes? Either way we have to move because a 1300 sq foot, 3 bedroom, 1 bathroom home in the burbs is not quite working for this lite green family of 6.

Also since starting this blog there is this new webpage- it's called Pinterest. Have you heard of it at all?? Well it is like SAHM crack. You can pretty much save webpages with all the "cool stuff" you are going to do errr try and do errr like to think you do. I would like to show you my efforts at trying out some of my "pins". Granted they do not all come out so great, some are amazing- mostly the food one, since I CAN cook like no ones business- some are epic fails. It gets humorous to say the least.

So hang on cause here we go! Or like I say to my husband on a regular basis "I saw this really cool thing on pinterest"

Today's adventure happens to be banana cake that looks delicious. Here is the link to it  http://meryhelluyere.tumblr.com/post/42054851728/banana-cake-with-cream-cheese-frosting-recipe

Now mine is in the oven, and after it is out and frosted and taste tested I will let you know how it is. But so far from licking the bowl, it has too much sugar in it :( So to help it along I think I will make a barely sweet cream cheese frosting to cut some of the sugar throat burn I think it will have. Oh yeah I also didn't think it was REALLY supposed to cook at 275 so mine is in the oven at 325.... we will see. I promise to post a pic when it is done!
Posted by Kelly at 3:15 PM No comments:

Not so wordless Wednesday

Not that this has much to do with being a 50's housewife, other than "they" say to put your husband first, and to always think of him. I think in this day and age we get so busy and so distracted that we lose sight of stopping and taking a moment to say I love you and I apprecitate you and everything you do for our family.

I know all too well that in an instant it can be taken away from you. My sister in law had her world taken away in a blink of an eye, so I think that maybe I know what I have to lose, and I make sure to tell my husband I love him every night and that I do appreciate what he does for us. And what he does to give me the life I have, I am able to stay home and raise our children, when so many moms are not able to do that.

So I pass on to you a request to take the time to put him first once in a while, what is the worst thing that will happen? He will feel loved? Your children will see how to treat their future spouse? You will know that if anything ever happened to him that he knew he was special to you? 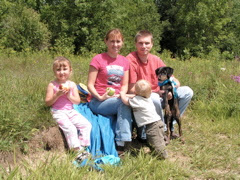 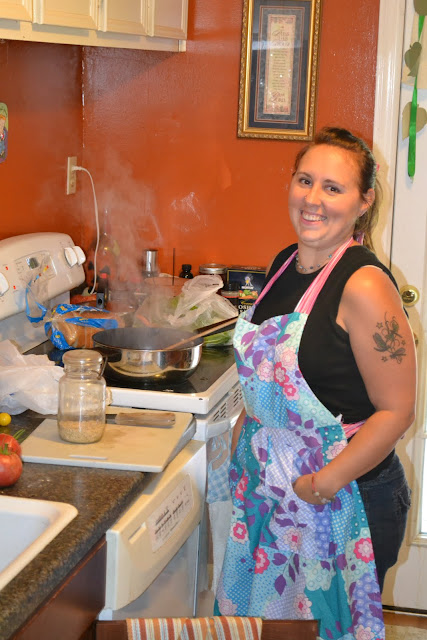 So some of you have read that me and my west coast counter part are doing a tandem experiment of being a 50's housewife for the next 2 weeks. At first it sounded easy peasy but as I have looked into it more I am beginning to become scared....very very scared.  Here is a peek of what I have to do... 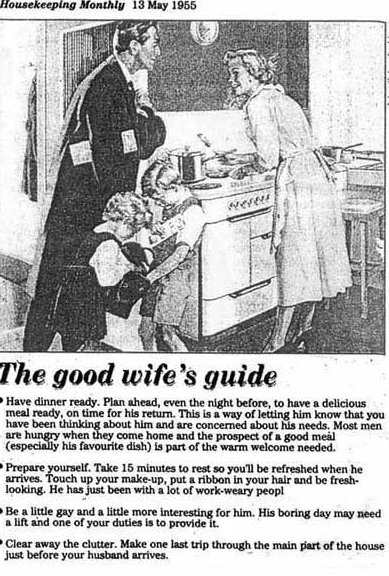 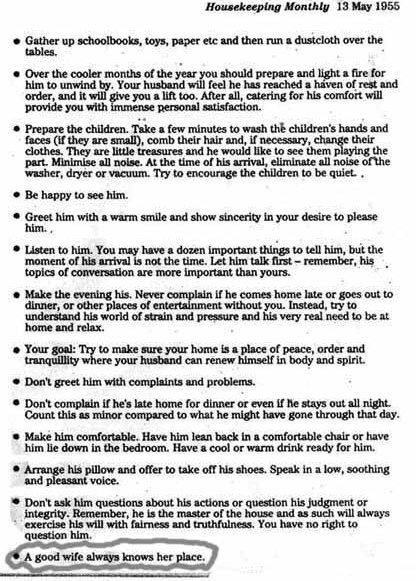 This last one has me perplexed.... my place is by my husband's side, as his equal, as the one who makes his house a home. So now that I know this I am going to strive to keep my home picture perfect. This is always some thing I have struggled with. I find it much too appealing to go outside and play with my children, or go on a trip to the country and explore with them.
So since I said I am going to tweak the rules a bit I figured I would first post them. So here they are in all their glory!

From a 1950's high school home economics textbook, teaching girls how to prepare for married life.

1. Have dinner ready: Plan ahead, even the night before, to have a delicious meal on time.

This is a way of letting him know that you have been thinking about him, and are concerned about his needs. Most men are hungry when they come home and the prospects of a good meal are part of the warm welcome needed.

2. Prepare yourself: Take 15 minutes to rest so you will be refreshed when he arrives. Touch up your make-up, put a ribbon in your hair and be fresh looking.
He has just been with a lot of work- weary people. Be a little gay and a little more interesting. His boring day may need a lift.

3. Clear away the clutter. Make one last trip through the main part of the house just before your husband arrives, gathering up school books, toys, paper, etc. Then run a dust cloth over the tables.
Your husband will feel he has reached a haven of rest and order, and it will give you a lift, too.

4. Prepare the children: Take a few minutes to wash the children's hands and faces if they are small, comb their hair, and if necessary, change their clothes.
They are little treasures and he would like to see them playing the part.

5. Minimize the noise: At the time of his arrival, eliminate all noise of washer, dryer, dishwasher or vacuum. Try to encourage the children to be quiet.
Be happy to see him. Greet him with a warm smile and be glad to see him.

6. Things to avoid: Don't greet him with problems or complaints. Don't complain if he's late for dinner.
Count this as minor compared with what he might have gone through that day.

7. Make him comfortable: Have him lean back in a comfortable chair or suggest he lie down in the bedroom. Have a cool or warm drink ready for him. Arrange his pillow and offer to take off his shoes.
Speak in a low, soft, soothing and pleasant voice. Allow him to relax and unwind.

8. Listen to him: You may have a dozen things to tell him, but the moment of his arrival is not the time. Let him talk first.

9. Make the evening his: Never complain if he does not take you out to dinner or to other places of entertainment; instead, try to understand his world of strain and pressure, his need to be home and relax.

10. The goal: Try to make your home a place of peace and order where your husband can relax.

Tomorrow I will post the "rules" according to my tweaking!
Posted by Kelly at 6:34 PM No comments:

Hey all, so I was given the idea and the challenge of being a 50's house wife for 2 weeks, and I graciuosly accepted.

My Friend and fellow blogger Crystal Piccolo of  http://mylifeasmom-oregon.blogspot.com/2011/04/two-weeks-as-50s-housewife.html is doing the experiment and I am going to follow suit....I think. I am going to have her guest post on my blog of her experiences good and bad. So then I got to thinking why not have her be the 50's house wife, while I try my hand at a house wife of the later years? Maybe the 60's or 70's? And then I got to thinking that it wouldn't be too much different thatn what I do day to day here at the house.

So this experiment is going to start on the morning of August 17th so I have enough time to do all my research and get a game plan down!  Do you all have tips or words of advice for me?
Posted by Kelly at 5:06 PM No comments:

Kelly
Living the farm life- or at least learning to live it.